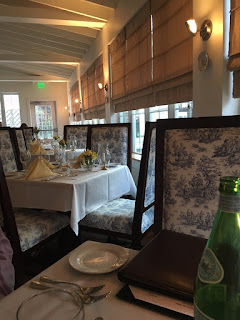 After 42 years of marriage, trying to find a way to celebrate that hasn't been done can be a challenge,however a nice meal in great surroundings is always a good option. This year we decided to use a gift card our daughter had given us to a hidden treasure Cafe Provencal in Williamsburg, VA.  When I say it is hidden, I mean that even people I work with who live in Williamsburg do not even know about this jewel.  Maybe because it is inside a country hotel (Wedmore Place), inside a winery (Williamsburg Winery), but believe me, it is worth the winding drive and elevator ride down from the hotel lobby- kind of like Harry Potter running toward Platform 9 3/4- like entering a different world!  The location, service and food are just amazing, the perfect choice for a leisurely "occasion" meal, and the staff treats you like you are the only guests there.

While we chose wine and the bartender made my Cosmo, a small basket of warm cornbread and rye bread slices were brought to the table, which only whetted our appetite.  We decided since it was a special occasion, we

decided to have appetizers first.  My husband was quick to choose the oysters on the half shell, a half-dozen that came on a bed of ice and with fresh grated horseradish and champagne mignonette sauce.  I selected a Scallop Ceviche, that truly looked more like a work of art than something to eat. 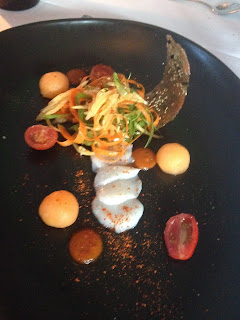 This was my first time having scallop ceviche and the taste and texture were just amazing.  Served with cantaloupe and green papaya salad and a fermented pepper sauce that added just the right amount of heat, and a crisp with sesame seeds that I think was for garnish, but added a crisp texture an sweetness to the dish- it was a perfectly composed dish with a variety of complementary textures and flavors.

After the successful appetizer course, I wondered how our entrees could stack up.  My husband decided to go with the duck breast that was served with smoked duck pastrami, a wine-poached peach and a carrot-cardamom jus and he was not disappointed.  The duck skin was crisp, and the breast meat was pink and succulent.  The artistry of jus and other complements are usually lost on my husband, but suffice it to say he cleaned his plate!  I decided to go with the market fish, which that night was black sea bass (after I determined that
"whole" fish meant without the head)! The plate again was pure artistry, but beyond how it looked, every single component was absolutely delicious.  They brought me a bowl so I could remove the bones which was very convenient. The fish was just delicious, flaky and flavorful with a crispy skin accompanied by a watercress nasturtium sauce that perfectly complemented the fish. The spotlight for me was shared with the cashew butter that was an accompaniment- creamy with a distinct cashew flavor.  I ate it with the lion's mane mushrooms until I ran out -  I honestly wanted to lick the plate, but I didn't think I would make it to my 43rd anniversary if I did.  The potato croquette also on the plate was not up the the standards of the
rest of the plate in my opinion- it was good, but not really complementary to the rest of the plate.  But no worries, my meat and potato-loving spouse scarfed it up and declared it delicious.

I wish I could share pictures of our desserts- mine was a chocolate terrine plate with a flame broiled marshmallow that was amazingly rich, and my husband opted for the dessert cheese board- but alas, my phone battery died.  You will have to take my word that it was incredible, and the server brought a a glass of sparkling Gamay to toast our anniversary. All in all a wonderful meal to celebrate yet another year of marriage, and an experience that I would definitely recommend.

A Taste of Italy (at Busch Gardens, Williamsburg)

With my daughter in town and a week off, we were determined to do some fun and tourist-y things while she was here. Since we have season's passes to Busch Gardens Williamsburg,we decided to go there as a family and hit the roller coasters Amusement parks no matter how good they are are not exactly known for great food (or reasonable prices!), and we ate lunch before we left so no one would be hungry, and we figured we would leave before dinner. But everyone was having a great time and the weather was awesome (warm but low humidity, nice breeze), so we decided to find something to eat for dinner and close the park down. As a park that is centered on countries of Europe, there are great opportunities for some fantastic food, however, when you are serving thousands of people of varying tastes, that can be challenging. We have tasted food at the Festhaus (Bratwurst, German potato salad, and mile-high sandwiches), at the Smokehouse where they have incredible ribs, but our favorite p 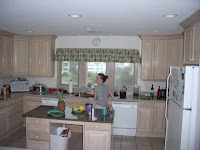 Since the time we first bought our house, about 9 years ago, I really wanted an island in my kitchen, but since we added a two-story addition, there just was no money in the budget to accommodate that fantasy. Every time we have visited a house with an island, I have just loved how an island, even a small one, can enhance work flow and provide additional prep space. This most recently was brought to mind when we stayed at the beach house for the girls' birthday last April. The house had a small granite-topped island(right) that served as a baking center with all appliances, equipment and accessories for baking collected in one place. Since this island was in the center of a kitchen about the same size as m ine, I started thinking that this is something that would work and so I started looking around for some alternatives that would not require demolition and construction. The first alternative we thought about is an old butcher block, something my husband has always wanted. But w

Jose Andres for a Cause

Groupon and Living Social offer so many great food-related opportunities, but here is one that I wish I could take advantage of. a Jose Andres Culinary tour of Penn Quarter in DC.  Somebody please go and take pictures ;) What fun, you get to kick off with appetizers and apps then hit Penn Quarter's array of participating restaurants Azur , Oyamel , Jaleo , Proof , Zaytinya , and Poste for special plates and cocktails.  Sound amazing? Yeah, it does to me too!  And the best part is proceeds go to Jose's non profit efforts with World Central Kitchen to address hunger and poverty.  For $99, it is a steal!